About the exhibition
Adam Hawałej photographed Tadeusz Rózewicz for almost thirty years. He took the first photo of the poet in 1986, at the office of the Polski Theatre’s literary secretary. The last one – in 2014, during rehearsals for “White Marriage” in the Współczesny Theatre. Hawałej depicted moments of intimacy, with Rózewicz’s wife and brother, and he photographed formal situations. He was the only photographer allowed during rehearsals to “The Scattered File”, directed by Rózewicz himself, he was present during the “Dumpster” happening, walks in the zoo and at Jatki street, by the Memorial to Slaughtered Animals. He was also present when something important happened – when Rózewicz received an honorary doctorate of the Academy of Art and when he met Czesław Miłosz and Günter Grass. 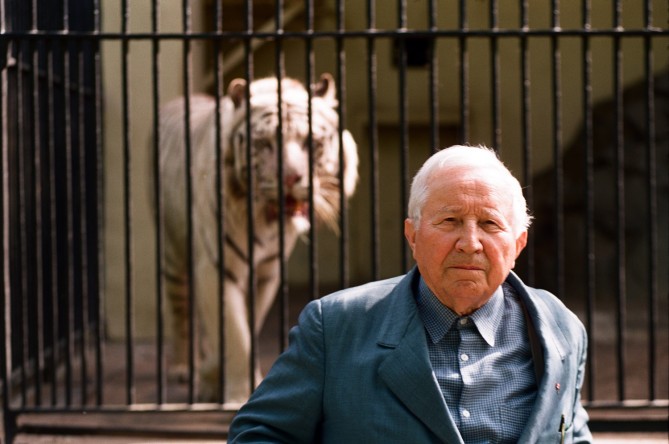 Adam Hawałej on photographing Tadeusz Różewicz
Tadeusz Rózewicz generally did not like photographers, or pretended that he didn’t. That is why I never produced a complete photo session with his participation. My photos were taken spontaneously and voluntarily, during our conversations and walks. All this photographing was the effect of an impulse. Rózewicz reluctantly participated in meetings, he hated crowds. But he had something inimitable in him – a look of warmth and directness. I photographed him as he was – an ordinary man.

Adam Hawałej (1945) is a photographer and photojournalist. For many years he documented performances by Henryk Tomaszewski, Jerzy Grotowski, Jerzy Grzegorzewski and Tadeusz Rózewicz. He’s the author of the album “Teatr Polski gra” (Polski Theatre keeps playing, 1996) and of the publication on the problems of the disabled – “Wrocław bez barier” (Wrocław without barriers, 2006). In 2011 Hawałej published a photography album of Tadeusz Rózewicz – “Rózewicz”, in 2016 – “Dumpster” with a series of photos documenting the 1989 happening.