The exhibition Mission: Poland is the story of Poland's 20th century, based on the lives of Jan Nowak-Jeziorański and Władysław Bartoszewski. Their experiences form a key part of a generation's history, having both been raised in a Poland liberated after 123 years of partitions, and yet which in 1939 was once again forced to battle for its own freedom.

Władysław Bartoszewski was imprisoned in Nazi-run Auschwitz and by Stalinist forces, then fought for several decades to uphold the memory of the Home Army and the Polish Underground State. Nowak-Jeziorański made three trips across occupied Europe in order to reach the Polish Government in Exile, then headed up Radio Free Europe for a quarter of a century afterwards.

The year 1989 was not the end of the struggles for Poland. Nowak-Jeziorański, as the advisor to the US National Security Council, campaigned for Poland to become a member of the North Atlantic Treaty, while Bartoszewski was twice elected as minister of foreign affairs. Their life-long missions successfully ended only once Poland had joined NATO and the European Union. Towards the end of their lives, they bequeathed vast collections of personal memorabilia to the Ossolineum, items which chart their fates, adventures and the work they dedicated their lives to. The general archives they collected during their lifetimes are equally as important.

In the various homes Jadwiga and Jan Nowak-Jeziorański lived in during exile, they tried to recreate the sense of a lost Poland. The works of art they purchased, including paintings, drawings, medals and historical souvenirs were to echo the atmosphere of a Polish country manor house. A selection of these are presented in the Museum. Many of the paintings represent the most valuable part of the collection: Drowned in Bosphorus by Jan Matejko, Cheerful quarters by Józef Brandt, Roses by Leon Wyczółkowski, and also the works by Julian Fałat – Near Bystra and A Bear Killed in a Hunt on a Sleigh. Alongside these, there are drawings by Cyprian Kamil Norwid and Józef Czapski, as well as historically themed works such as Fredro Near Smolensk in 1633 by Juliusz Kossak or A Scene from the 1863 Uprising by Antoni Piotrowski. The collection is made up of some 200 paintings, watercolours, sketches, miniatures and drawings, some 250 items of weaponry, silver and glassware, porcelain, fabrics, with over 200 medals and decorations. The coin collection represents over 900 Polish coins, 116 foreign-minted coins and 163 banknotes from Poland and abroad. The collection also includes numerous old books and prints, produced between the 16th and the 19th centuries.

Their gift to the Ossolineum includes a rich collection of manuscripts and archives documenting the wartime activities of the founder: materials relating to his courier journeys and Action “N”, as well as those from the time Nowak-Jeziorański worked in Radio Free Europe and its Polish Station, and a range of correspondence with the most important figures from post-war migration, including Jerzy Giedroyc, Witold Gombrowicz, Kazimierz Wierzyński and Gustaw Herling-Grudziński. 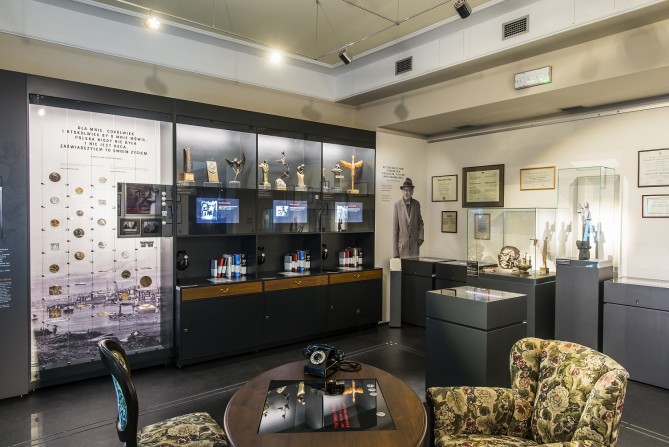 In 2003, Władysław Bartoszewski began handing over his archives to the Ossolineum, items he had been collecting throughout his life relating to the most modern times of Polish history, including those published during WWII such as underground books and magazines, posters and leaflets. His collection includes the output of several hundred publishers from the 1939-1940 period, most of these unique items, including prints from the times of the siege of Warsaw, publications from the occupying forces, posters and announcements which shed light on the cultural life under the General Government. The “Felicia” archive in itself is priceless, surviving only because the order for it to be destroyed was not carried out. The collection bequeathed to the Ossolineum also includes underground publications and books from the period of martial law and the private archives of Bartoszewski's, his awards and decorations, including those of greatest importance: The Order of the White Eagle and the German Grand Cross of Merit with a Star and Garter, and of course the Order of the Righteous Among the Nations. This also includes hundreds of other medals, plaques and reliefs which represent a rich treasure trove of the medal-maker's art.